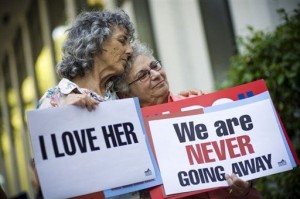 Some of the newest tactics of anti-homosexual marriages have garnered high criticism and disapproval from the different pro-marriage groups. Some members report that they have been contacted by alleged members of a group called ‘Citizens of Washington United for Marriage’. The aim of the callers is to confuse their victims into voting ‘no’ for the referendum instead of ‘yes’.

The so-called ‘Citizens of Washington United for Marriage’ group does not actually exist. This incident has brought more tension between pro and anti same sex marriage groups. In light of this, the Seattle Atheists have voiced their dismay against those claiming to be following ‘God’s law’, quoting one of the Christian 10 Commandments, specifically “Thou shalt not bear false witness…” Groups are now trying to track down the organization or individuals behind these prank calls.