Of Pasta and Pirates: The 5th Annual Pastafarianism Dinner 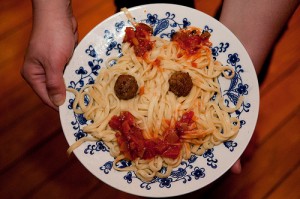 To celebrate ‘Out Week’, student members of the University of Northern Iowa Freethinkers and Inquirers (UNIFI) hosted the fifth annual Flying Spaghetti Monster Dinner. The gathering involves a fun and entertainment and food and is attended by both Pastafarians and pasta lovers alike. Visitors and attendees were welcomed by hosts wearing pirate regalia. Pirate costume is considered as the official garments of the Church of the Flying Spaghetti Monster.

The UNIFI is a group of freethinkers and inquirers at the University of Northern Iowa. Its members include atheists, skeptics, freethinkers, and those who like to criticize religious claims. They celebrated Out Week, which is an event where non-religious students of the University of Northern Iowa are encouraged to formally ‘come out’ into the community. This is a big deal for some, since the university itself is a primarily religious campus.

The events of the night began with a satirical ‘prayer’ to the Flying Spaghetti Monster, which is the deity of the Pastafariansim belief. The meal included salad, breadsticks, and the favorite of all, spaghetti. After the dinner, a performance by the University’s Improvisation Act Group “Half Masted” gave the people an entertaining show.

The final activity of the night was a fundraising raffle. The beneficiary of the raffle was the Northeast Iowa Food Bank. They targeted to raise $500 for the Food Bank. The final count revealed that they had collected a total of $600. All in all, it was a pretty successful event.